by The Bayesian Observer

The average age of first time mothers in the developed countries of the world has been rising for the last ~40 years.

Here is another plot that shows the rate of occurrence of Down Syndrome, a chromosomal defect, as a function of the age of the mother at the time of child birth.

The curve really starts to shoot up at 30. In the UK, the average age of a first time mother is 30 years. It is well known that the fertility rate in women decreases after the age of 30 and drops rapidly after 35. Older mothers are likely to find it harder to have a baby and if they do, then they run a higher risk of chromosomal defects. Given the possibilities of all these negative consequences, the increase in the average age is a bit disturbing. It seems like there is a hidden cost to more women working and for longer.

Why is it that women are waiting longer before having their first born despite the risks? Most of my hypotheses (of which more than one, or none, may be true) have to do with women working:

One source of further information is the following map, showing the absolute increase, in years, in the age of a first time mother, over the last 40 years, state by state in the US:

This number is highest in the North Eastern states of NY, NJ, MA, CT, etc. The intensity of the colors in the map above correlates well with population density, and with economic activity in general (meaning more working women).  Here are two more plots I came across in a US based study done by P&G, that suggest that at least in the US, employer policies may be responsible.

What would a mother value most from their employers?: 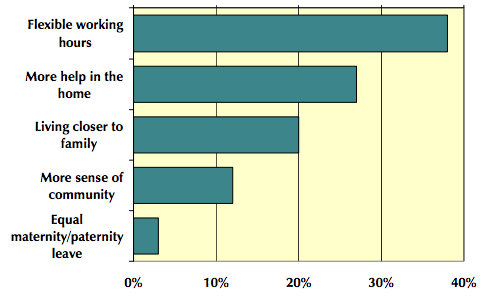 How much guilt to mothers feel about work-life balance?: